Paving stones, newspapers from Hong Kong, and just these disturbing, black body bags: The artist Pia Kintrup could not find a better place for her installation than the xpon Art Gallery with its very special, almost eerie basement vault: A lot of space for an installation that seemed unusually oppressive with all the real ingredients – one year after the violent excesses of the Chinese police against demonstrators in Hong Kong. In this respect, it was an unusually political and moving theme during the otherwise colorful and cheerful so-called Hamburg Summer of Culture.

The gallery in a district called  Münzviertel had offered the artist from Duesseldorf the entire space in the gallery’s basement – and it was worth it, the effect on the visitors was correspondingly haunting. In this respect, it was a special exhibition in the “Hamburg Cultural Summer”.

Eyewitness to the chaos of Hong Kong

How does a young artist come to this highly political topic of all things? I meet Pia Kintrup in a café in Hamburg-Eppendorf. She tells me that she has a special connection to Hong Kong – since the artist has visited the city many times in recent years, she even felt at home there.

Two years ago things got serious. Chinese police marched up – the situation escalated. And Pia Kintrup was right in the middle of it, when policemen fired tear gas into the crowd and beat demonstrators. 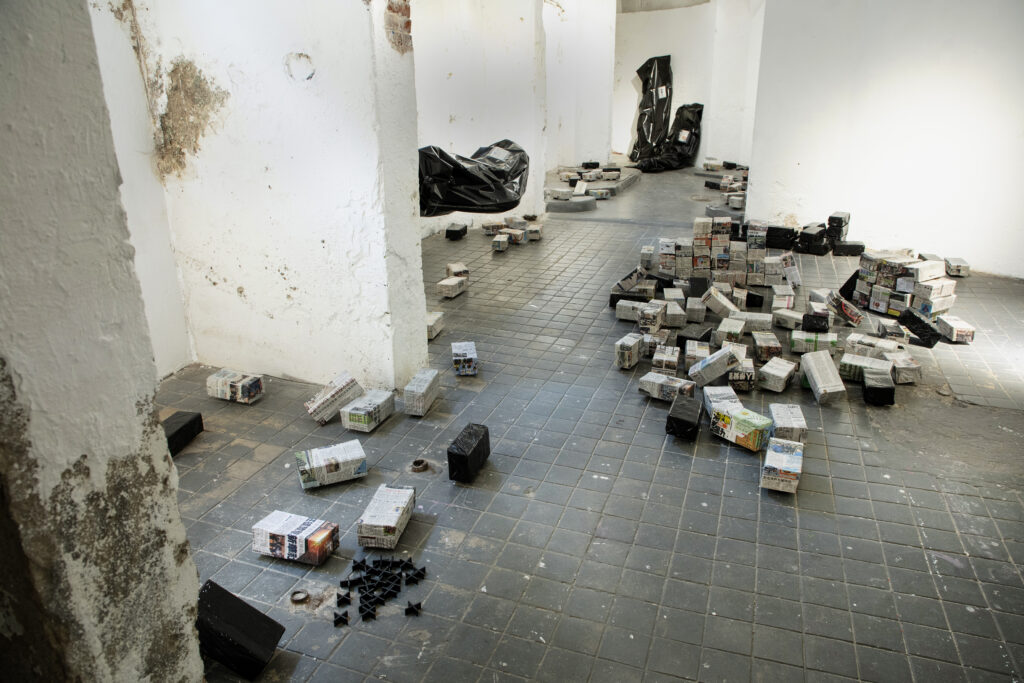 Pia tells me about all the horrors that happened in the city. And incidentally, I notice that the German media have been strangely quiet since the barricades stopped burning in Hong Kong.

The artist smuggled a pack of newspapers out of Hong Kong on her return flight. Among them was one of the last newspapers that still openly reported on the police abuses.

The exhibition showed some rolls of calligraphy paper with Chinese characters with an explosive content: “Liberate Hong Kong, Revolution of Our Time” is the recurring sentence, which was a popular protest slogan of the political activists in Hong Kong. For this object, the artist used materials such as calligraphy paper, goat hair brush and ink, all original Chinese. The installation refers to this event: In the summer of 2021, the first case under the new controversial security law was heard. The 24-year-old Tong Ying-kit was accused of breaking through a police barrier during a demonstration with his motorcycle and allegedly injuring three police officers. The central point in the trial was the flag attached to the motorcycle with the inscription: “Liberate Hong Kong, Revolution of Our Time”.

The slogan violates the new security law and is therefore illegal.  “That’s why I wrote this, for all those who are no longer allowed to write this in Hong Kong,” says the artist. The accused activist Tong Ying-kit has been found guilty of terrorism and inciting secession. He was sentenced to nine years in prison, the prosecutor had demanded three years in prison.

Hamburg Arts: How do you feel today, after the exhibition, when you think of Hong Kong?

Pia Kintrup: “Hong Kong was “my place” from day one, that’s done now, it’s quite bitter. For me it is a great loss. I can’t go back there either, that would be much too dangerous. I can’t even send emails there, that would also be too dangerous for the people living there.”

What do you think about the exhibition at xpon Art Gallery?

Pia Kintrup: “I thought it was great that the gallery dares to do this. That you use the freedom that we have in Germany. That is done far too rarely. It’s a privilege to live here.”

What did you draw from this for yourself as an artist?

Pia Kintrup: “For me, it was a clear, bold performance. This big space all for me, that’s where you take a stand. But I was also totally relieved when it was over. That was my most difficult job ever. For me it was a personal hell, I had to built up the installation for days, there were 260 stones.”

What is your artistic working method?

Pia Kintrup: “On the whole, I work in multimedia and now I see myself more as a visual artist than as a photographer. Even during my studies, it quickly became clear that I could not define myself exclusively in photographic terms or through artistic photography. I was always a kind of border crosser among my fellow students, and I picked up knowledge and craft skills from all the disciplines I could use. In between, no one knew what I was actually enrolled in. I also dabbled in sculpture, surreal film and experimental design. That’s why I work so freely today.”

How are the people in Hong Kong today?

Pia Kintrup: “The people are desperate and defenseless. They simply don’t want to be absorbed by China’s power apparatus. I saw scenes on the streets with bleeding people, the police did not allow any help. They beat teenagers, and even pregnant women. There were also thugs on the streets. In the metro, everyone was very scared, everyone was looking toward the doors of the train.”

The fear of Chinese police is well-founded. On August 31 two years ago, Prince Edward Station in Hong Kong was the scene of severe, violent attacks by numerous forces: police officers tried to arrest protesters on the metro, and also arbitrarily and brutally attacked harmless passengers. This police operation is documented with photos and videos.

The U.S. has announced a diplomatic boycott of the Winter Olympics in China. However, American athletes will compete there.

The new security law enacted by China has been sharply criticized internationally. Civil rights and democracy activists in Hong Kong continue to be arrested and sentenced to prison. In late October, Amnesty International closed its Hong Kong office, saying the controversial security law enforced by China made their work impossible. Hong Kong’s election law was reformed in March 2021. According to European media reports, this will undermine democracy. Hong Kong’s parliament would then be dominated by representatives loyal to Peking. And the inhabitants are already feeling this directly. An important sculpture (“The Pillar of Shame”), created by Danish artist Jens Galschiot,  has been removed from the university campus on December 23. The critical work of art commemorates the Tiananmen Massacre of 1989.

Copyright: photos of the exhibition by Pia Kintrup

Link to the xpon Art Gallery in Hamburg

“I won’t paint the war. I am not Francis Bacon.” Interview with an Ukrainian artist